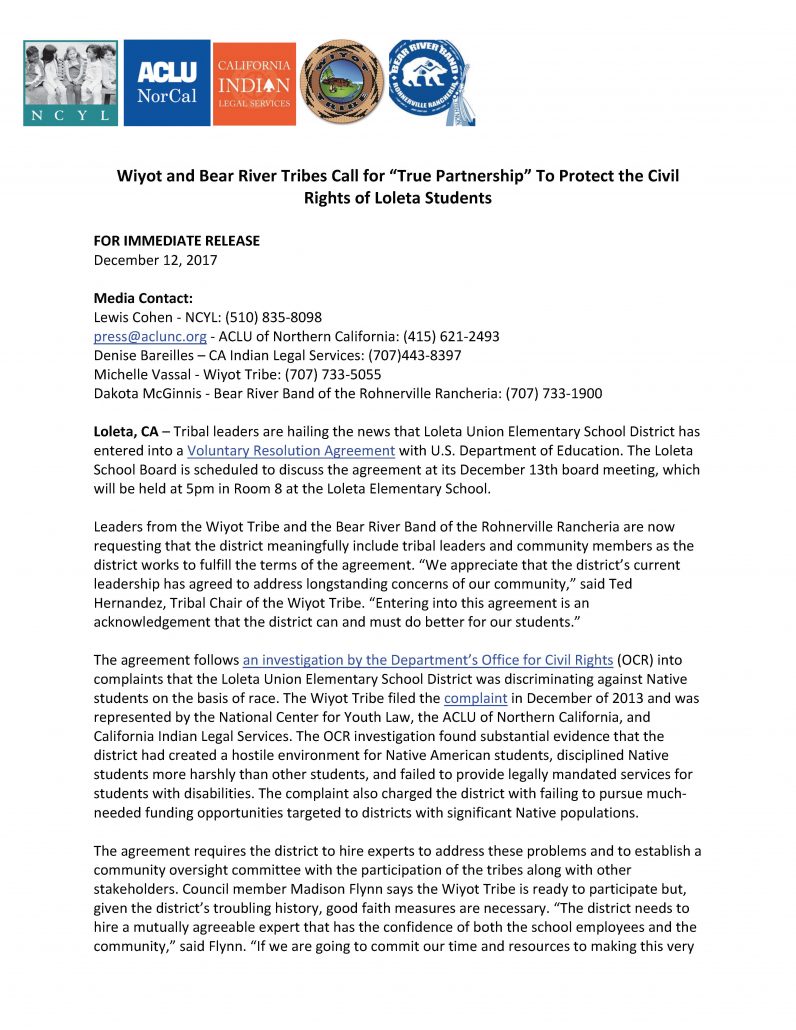 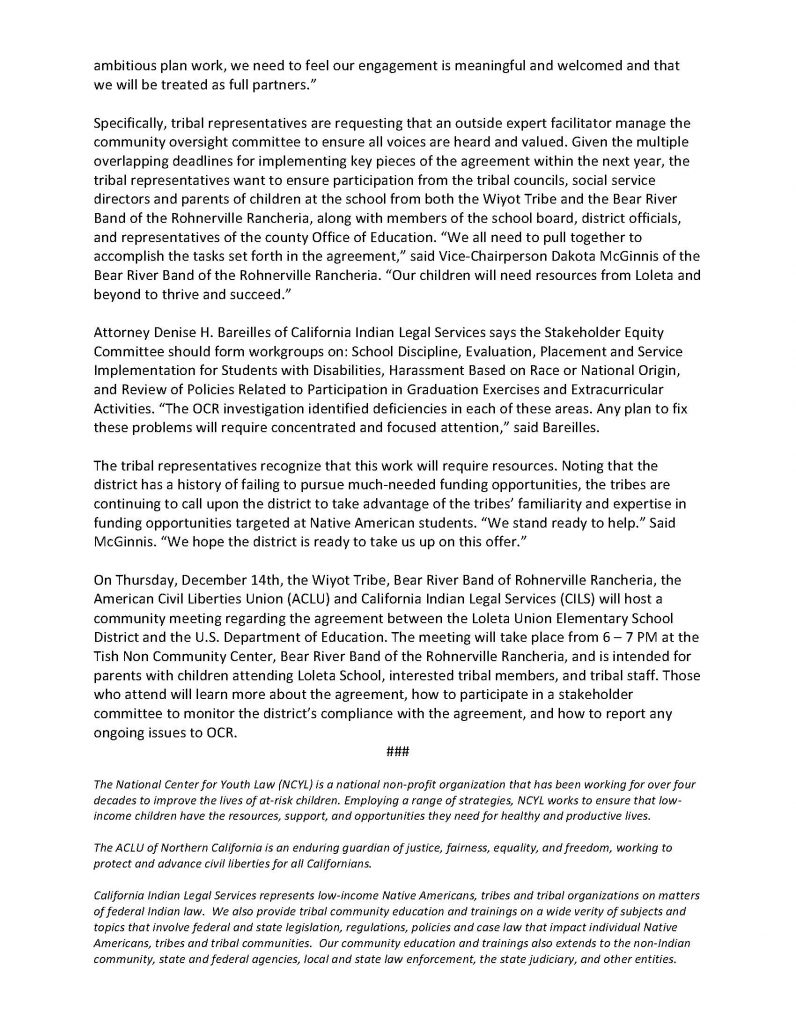 entered into a Voluntary Resolution Agreement with U.S. Department of Education. The Loleta

School Board is scheduled to discuss the agreement at its December 13th board meeting, which

will be held at 5pm in Room 8 at the Loleta Elementary School.

district works to fulfill the terms of the agreement. “We appreciate that the district’s current

leadership has agreed to address longstanding concerns of our community,” said Ted

Hernandez, Tribal Chair of the Wiyot Tribe. “Entering into this agreement is an

acknowledgement that the district can and must do better for our students.”

students on the basis of race. The Wiyot Tribe filed the complaint in December of 2013 and was

represented by the National Center for Youth Law, the ACLU of Northern California, and

students more harshly than other students, and failed to provide legally mandated services for

students with disabilities. The complaint also charged the district with failing to pursue much needed

given the district’s troubling history, good faith measures are necessary. “The district needs to

community,” said Flynn. “If we are going to commit our time and resources to making this very

ambitious plan work, we need to feel our engagement is meaningful and welcomed and that

we will be treated as full partners.”

Specifically, tribal representatives are requesting that an outside expert facilitator manage the

community oversight committee to ensure all voices are heard and valued. Given the multiple

overlapping deadlines for implementing key pieces of the agreement within the next year, the

Band of the Rohnerville Rancheria, along with members of the school board, district officials,

and representatives of the county Office of Education. “We all need to pull together to

accomplish the tasks set forth in the agreement,” said Vice-Chairperson Dakota McGinnis of the

Bear River Band of the Rohnerville Rancheria. “Our children will need resources from Loleta and

beyond to thrive and succeed.”

Implementation for Students with Disabilities, Harassment Based on Race or National Origin,

Activities. “The OCR investigation identified deficiencies in each of these areas. Any plan to fix

these problems will require concentrated and focused attention,” said Bareilles.

The tribal representatives recognize that this work will require resources. Noting that the

district has a history of failing to pursue much-needed funding opportunities, the tribes are

McGinnis. “We hope the district is ready to take us up on this offer.”

community meeting regarding the agreement between the Loleta Union Elementary School

District and the U.S. Department of Education. The meeting will take place from 6 – 7 PM at the

Tish Non Community Center, Bear River Band of the Rohnerville Rancheria, and is intended for

who attend will learn more about the agreement, how to participate in a stakeholder

committee to monitor the district’s compliance with the agreement, and how to report any

decades to improve the lives of at-risk children. Employing a range of strategies, NCYL works to ensure that lowincome

children have the resources, support, and opportunities they need for healthy and productive lives.

The ACLU of Northern California is an enduring guardian of justice, fairness, equality, and freedom, working to

protect and advance civil liberties for all Californians.

of federal Indian law. We also provide tribal community education and trainings on a wide verity of subjects and

Americans, tribes and tribal communities. Our community education and trainings also extends to the non-Indian

community, state and federal agencies, local and state law enforcement, the state judiciary, and other entities.