Before 1934, most Indian tribes did not have written laws and certainly not constitutions. There are exceptions, however. The Cherokee Nation adopted its first constitution in 1827, establishing a three-branch system of government not unlike that of the United States. That does not mean tribes were without law before European colonization and American expansion; tribes, depending on their size and traditions, governed through councils of elders or individual leaders to ensure communal safety, protect resources, and punish wrongdoers.

How and why, then, did tribes begin adopting written constitutions when unwritten rules and social norms worked for millennia? After a dark period that saw the end of the Indian wars and the advent of boarding schools, Bureau of Indian Affairs Commission John Collier, an appointee of Franklin Roosevelt, worked behind the scenes on the Indian Reorganization Act (IRA). The far-reaching 1934 law ended the allotment of Indian land, authorized the Secretary of Interior to take land into trust for tribes, and attempted to rebuild tribal self-government. The Act represented a compromise between progressives who supported tribal sovereignty and those who felt threatened by it. 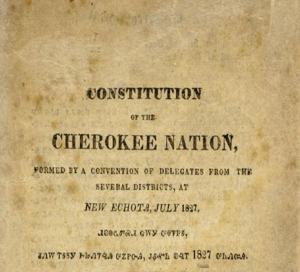 To promote what he considered modernized, effective government, Secretary of Interior Harold Ickes created a model tribal constitution and dispatched federal agents to Indian reservations across the country to promote it. Elections, an unusual way for most tribes to pass or change laws, gave tribes the opportunity to decide if they would accept the IRA and its constitutional governments. As an enticement, congress appropriated millions of dollars in loans available only to those tribes that adopted the IRA. About 177 did just that, while 81 tribes rejected the IRA altogether. Some believe that tribal members who did not vote in IRA elections counted as “yes” votes by federal officials.[i]

The constitutions offered to tribes under Collier’s “Indian New Deal” did not look like the United States constitution. Generally, BIA agents presented tribes with boilerplate forms that included one executive branch of government, usually a tribal council, to pass laws and negotiate contracts. They did not create tribal courts or legislatures (which were not prohibited either), perhaps because tribes were not yet accustomed to developing written laws or ensuring BIA control over tribal governments. Maybe the biggest difference between tribal constitutions and those of states was the requirement for the Secretary of Interior to approve tribes leasing their land and hiring an attorney.

Over time, tribal constitutions evolved from boilerplate forms into more complex bodies of law reflecting the tribe’s customs and preferred styles of self-governance. The constitution of the Mandan, Hidatsa, and Arikara Nation of North Dakota, for example, authorizes its tribal court to hear suits under the Indian Civil Rights Act of 1968. Others do not. Section II of the Hopi Constitution and By-Laws outlines enrollment criteria for tribal members. The Mississippi Band of Choctaw Indians dictated the frequency and timing of elections in its constitution. Keep in mind; not all tribes have constitutions. Some, like the Navajo Nation, opted against it.

Tribal constitutions are as diverse and fascinating as their origin history. Although they initially did not reflect traditional governance, they marked a huge leap away from the assimilationist policies of the previous last century.

Honoring Our Sisters: Rethinking Tribal Court Jurisdiction CILS Board of Trustees—Who Are They?
Scroll to top