The California Supreme Court recently invalidated a rule of court compelling counties to enroll tribal children in pre-ICWA dependency cases but affirmed Social Service’s obligation to assist in enrollment after an Indian child finding has been made. The case, which is cited as In re Abbigail A., Ct.App. 3 C074264 originated in Sacramento County.

Rule of Court 5.482(c) required counties to apply “active efforts” to enroll children before being deemed an Indian child and compelled the agency to “secure enrollment” after a tribe responds that a child may be eligible, but before eligibility or enrollment has occurred. Sacramento County objected that the rule essentially put the cart before the horse and applied the Act (and its active efforts standard) in advance of an ICWA finding. The state high court agreed and held that Rule of Court 5.482(c) exceeded state and federal statutory language.

By contrast, Rule of Court 5.484(c)(2) defines the actions that constitute “active efforts” and includes requiring the county agency to assist in enrolling Indian children who are eligible for membership. Social Services, by stepping into the parents’ shoes, already assume a number of legal responsibilities for dependent children such as enrolling them in school, health care, and special education. Facilitating tribal membership is also one of those duties. This is significant because the agency usually possesses documents that tribes need to enroll a minor, such as birth certificates and social security cards.

The facts in Abigail A. were complicated by the fact that the minor’s father was not enrolled in the Cherokee Nation of Oklahoma. Both the  lower court’s record and the Tribe stated that the minors could not be enrolled until the father’s membership was completed. Sacramento County argued that this created a new class of ICWA children, ones who may be eligible but whose parents had not perfected tribal membership.

The rule was designed to capture the in-between period after a tribe notifies the court of eligibility, but before the paperwork can be completed. Rule of Court 5.482(c) authorized the lower court to treat those cases as if they were Indian children and mandated that the agency expedites securing enrollment.

In striking down Rule 5.482(c) the Court did not preclude application of the ICWA once a child has been deemed eligible and a finding has been made that a child is defined as an Indian child for purposes of the ICWA. In other words, if a child is found to be  an Indian child the Act applies, but  during the period before that finding is made, the rule (which was invalidated) cannot require a substantive application of the ICWA. Nothing in the decision appears to excuse the agency’s ongoing obligation of notice and inquiry, and the ruling does not exempt Social Services from its duty to assist in enrolling Indian children after the ICWA finding has been made.

Learn more about the Abigail A. case and ICWA cases in general here: 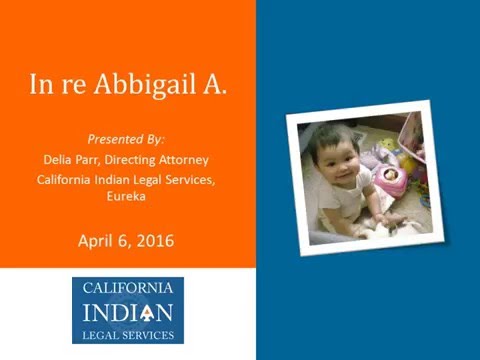