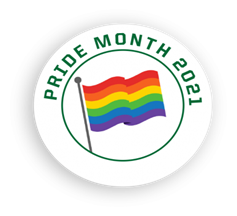 CILS wishes everyone a happy and safe Pride month! The month-long collection of events, flag-waving, and parade floats is meant to celebrate and honor who we are and show support for our clients, friends, staff, and allies who do not identify with traditional ideas of gender or sexuality.

What does CILS have to do with Pride? Our federal Indian and Tribal law work builds on values promoted by the LGBTQ2+ community – fairness, equality, and inclusion. Interestingly enough, the number “2” in LGBTQ2+ recognizes people who identify as “Two-Spirit,” a pan-Indian idea that acknowledges individuals who do not identify as heterosexual or cisgender but rather a third gender or gender variant. The term “Two-Spirit” came out of a 1990 Native American/First Nations gay and lesbian conference in Winnipeg, Canada, as more precise and culturally informed than “gay” or “transgender” because such individuals were not only embraced by their communities but often revered for possessing qualities connected to both sexes.  It was non-binary people of color who helped launch the modern gay rights movement with the Stonewall Riots of 1969, thus giving CILS and Native communities another reason to celebrate Pride.

Long before the U.S. Supreme Court upheld marriage equality on equal protection grounds in Obergefell v. Hodges, 576 U.S. 644 (2015), Native American communities not only accepted but respected and even revered people who did not conform to conventional gender roles or sexual identities. The Lakota people, for example, recognized winktes, males who adopted a female identity, as powerful and often relied on them to name infants and serve in other ceremonial roles. More recently, in the wake of the cultural and political debate that unfolded over marriage equality in the mid-2000s, many Tribal nations have shown their commitment to inclusion and equality while flexing their sovereign powers to amend and develop laws that allow for same-sex marriage.  Dozens of Tribal nations, including Suquamish (WA), Little Traverse Bay Band (MI), Iipay Nation of Santa Ysabel (CA), Pokagon Potawatomi (MI), Leech Lake (MN), Puyallup (WA), Coquille (OR), Shoshone Arapaho (WY), Keweenaw Bay Indian Community (MI), Tlingit & Haida Indian Tribes (AK), Mashantucket Pequot Tribal Nation (CT), and the Oneida Nation of Wisconsin, recognized and permitted same-sex marriage before it was legal throughout the United States.

CILS continues to advocate for equality and sovereignty on behalf of Tribal  Nations, Native American organizations, and individuals. CILS projects and work that address LGBTQ2+ issues include drafting and revising family and employment codes to use gender-neutral pronouns and acknowledging the rights of same-sex couples and non-binary individuals. Helping clients who identify as LGBTQ2+ draft prepare thorough estate plans that protect their same-sex spouses, partners, and other family members, and more. Not long ago, a CILS staff member serving as a Tribal court judge officiated at the same-sex couple’s wedding, the first we know of under the laws of that Tribe.

For statistics about the economic opportunities, family acceptance, and health risks facing Two-Spirit people, check out “Spotlight on Two-Spirit Communities” by NCAI: https://www.ncai.org/policy-research-center/research-data/prc-publications/A_Spotlight_on_Native_LGBT.pdf