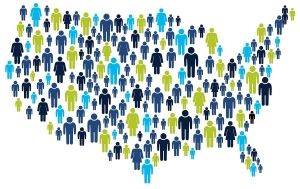 American Indians were excluded from the first six censuses from 1790 through 1850. The original mandate in the US constitution excluded Indians because they were not taxed. This theory was based on the premise that American Indians had a political allegiance to their own tribes and thus were not truly a part of the United States.

The US Census Bureau started counting Indians in 1860, but only those that were considered assimilated were officially counted. There was not a census for every reservation or group of American Indians every year. Only persons who maintained a formal affiliation with a tribe under federal supervision are listed on these census rolls.

Fast forward to 2020, and American Indians are still having issues being counted on the census. In a recent push to move the census count along, the US Census Bureau moved its deadline from October to September 30th, 2020 — backtracking from its previous decision to extend field operations due to the global pandemic. The shortened deadline disparately affects American Indians because of the large amount of remote and rural reservation land. Census Bureau employees must take extraordinary measures to reach homes that can be difficult to access with a “boots on the ground” approach, a time-consuming process that has been hampered due to COVID-19. The smaller deadline window could cause a grim outcome for an accurate census count.

It is important to remember that not everyone can fill out their census paperwork from their smartphone on their couch. In remote areas there may be a lack of internet or broadband connectivity or even a physical address in which to mail a paper questionnaire. Many people living on Indian reservations have only P.O. boxes — a place in which the US Census Bureau won’t mail questionnaires. For American Indians living in these remote areas, it is critical for census workers to physically knock on doors to get an accurate count. The process of going to remote areas is not only time consuming, but it is nearly impossible given the current pandemic which has created barriers to travelling and speaking in person.

The census is required by the US Constitution to determine the number of seats each state gets in the House of Representatives. An accurate population count is needed for tribes to receive adequate social services and representation in Congress. When American Indian communities are undercounted, hospitals, schools, roads and water systems are underfunded, and this year there has been a historically low response rate in undercounted areas. Tribal regions in particular are currently showing a self-response rate well below the national average of 63%[1]. Many federal programs, including Rural Domestic Violence Assistance and Rural Education programs, are aimed at helping people in rural areas and funding for those programs is often determined by census statistics.

Tribal governments play a critical role in ensuring a complete and accurate count of the American Indian population. If your tribe needs paper questionnaires delivered, contact your regional census center.

Despite all of these challenges, the Census Bureau claims to ensure that every person in the United States is counted. Now the issue is… time.