On June 1, 2021, the Supreme Court, in a unanimous decision, issued its ruling in U.S. v. Cooley finding that tribes have inherent authority to stop non-Indians on a right-of-way within the boundaries of an Indian reservation who are suspected of committing a state or federal crime. Once stopped, Tribal police officers, acting with probable cause, have the authority to conduct a limited investigation and if evidence of a crime is discovered, the Tribal officer can detain the non-Indian until he or she can be transferred or transported to the custody of state or federal law enforcement.  To those less familiar with Indian Country this ruling might seem to be so obvious that it was unnecessary for the Supreme Court to have announced it in a unanimous ruling.  However, while tribal authority over non-Indians on Tribal land has long been settled, that authority over non-Indians on non-Tribal lands, such as right-of-way, has been less clearly defined until now.

In overruling the Ninth Circuit Court, the Supreme Court applied a test created in the 1981 case of Montana v. United States, which provides two exceptions to the general rule that a tribe lacks jurisdiction over non-Indian on non-tribal lands within the reservation. The first exception is when the non-Indian consents to Tribal jurisdiction. Under the second exception, tribal jurisdiction can be extended to non-Indians on non-tribal lands if the person’s conduct “… threatens or has a direct effect on … the health or welfare of the tribe.”  The Supreme Court found that the Montana two exception fit the current case like a “glove.”

CILS paid close attention to this case due to its close work with Tribal governments, particularly Tribal police departments, and representing the California Tribal Police Chiefs Association (CTPCA).  The Ninth Circuit Court decision in Cooley raised practical and safety concerns for Tribal officers who routinely encounter non-Indians on the many state and county right-of-ways that crisscross California Indian Country. The United States, who prosecuted defendant Cooley, sought Supreme Court review of the Ninth Circuit decision seeking not only reversal but clarification on inherent Tribal authority over non-Indians found on non-Tribal lands within the reservation that have or are committing crimes.

CILS, on behalf of the CTPCA, filed an amicus (friend of the court) brief in partnership with the law firm Jenner & Block LLP in support of the federal government’s effort to overturn the Ninth Circuit Court’s decision.  Our brief focused on the day-to-day practical impacts the Ninth Circuit’s ruling would have on Tribal law enforcement officers and public safety in the tribal communities they are sworn to protect. The Supreme Court took note of our argument that negotiating county MOUs or other cross-deputations agreements are not the “be all” solution to Ninth Circuit Court’s ruling.

The Supreme Court’s decision in Cooley has given Tribes, their Tribal police officers the clarity needed when encountering non-Indians committing crimes on non-Tribal lands within a Tribe’s reservation.  The decision also establishes additional definition on the reach of inherent Tribal authority over non-Indians in general and to the application of the Montana two exception. The Supreme Court decision is clearly a win for Tribes, Tribal law enforcement and to Tribal community safety.

If you have further questions regarding the holding or the impacts of the decision on your tribal law enforcement department please contact Dorothy Alther at dalther@calindian.org or Jedd Parr jparr@calindian.org.

In the 1980’s, California and the United States mounted numerous prosecutions against Tribal members fishing in the Klamath River under the pretext of protecting dwindling fish populations. State and federal courts appointed CILS attorneys from the Oakland, Ukiah, and Eureka offices to defend Tribal members in felony prosecutions based on restrictions against some fishing methods and off-Reservation fish sales.  CILS’ successful defense work in these prosecutions helped end the unwarranted and unlawful prosecution of Tribal members harvesting their fish on their Reservation. One CILS case stands out.  (People v. McCovey)

The Klamath River felony prosecutions took place against the backdrop of a series of United States Supreme Court decisions from the 1970’s to the early 1980’s that vindicated Tribal fishing rights against the rights of competing fishing interests and significantly limited the scope of state restrictions against Tribal fishing. It is believed these cases, arising in Washington State, encountered more strenuous resistance to their enforcement than any series of United States Supreme Court decisions other than the 1960’s racial desegregation decisions.

The 1980’s felony prosecutions grew out of strong resistance to Tribal fishing rights. In the McCovey case, CILS attorneys represented a Yurok fisherman, Walter McCovey Jr. He was charged in State court with felonies based on allegations that he sold fish off-reservation in violation of state law. The California Supreme Court decided that McCovey’s felony prosecution was unsupported by any evidence showing adverse impacts of Tribal fishing on California’s fish resources. As a result, the Court dismissed the felony charges against McCovey, finding that California’s prosecution was incompatible with Tribal fishing rights and prohibited by federal law.

The McCovey decision cemented the idea that protecting threatened fish populations cannot be achieved through the random felony prosecution of Tribal members. Tribes must be involved in managing their fishing resources, and effective Tribal resource management can prevent adverse impacts to competing fishing interests like California’s.

The current climate disruption and drought cycles will continue to pit the protection of threatened fish populations and Tribal fishing rights against competing fishing interests. Thanks to CILS’ representation in the McCovey case and in similar cases, felony prosecutions of Tribal members cannot be used as a primary conservation tool to protect the fish populations that are so central to Tribal culture and economics in the Klamath River Basin.

This bill repeals the authority to collect many of these fees, among others. The bill makes the unpaid balance of these court-imposed costs unenforceable and uncollectible and requires any portion of a judgment imposing those costs to be vacated. If you qualify or have questions contact any CILS office nearest to you. 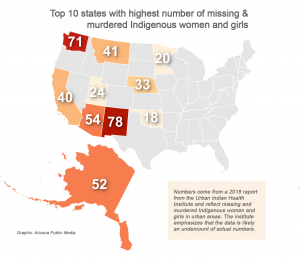 Please join two of NCTCC’s esteemed judges, Hon. Abby Abinanti and Hon. Michelle Krieger, to learn about how their Tribal Courts have responded to COVID and how “virtual” sessions have become the new reality in the courts of Indian Country. This is the latest offering in NCTCC’S popular, free Zoom training series.

This training will contain information specific to Tribal courts in which Judge Abinanti and Judge Krieger hear cases: Yurok Tribe, Bear River Band of the Rohnerville Rancheria, Hoopa Valley Tribe, and Karuk Tribe. The Judges do not intend to speak for all Tribal courts in Indian Country.

Please join us at 1:00 pm on January 15, 2021. After you register for the event you will receive Zoom login information.

This training is made possible by a generous grant from California Rural Indian Health Board. 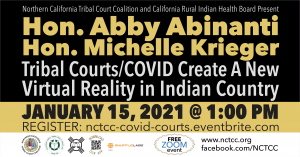