Spread across the state of California are hundreds of Indian “allotments.” These are parcels of land issued to individual Indians by the federal government.  The federal government holds legal title to the land in trust for the benefit of individual Indian co-owners.[1]  Allotments are different from “assignments,” the latter being tribal lands assigned by the tribe to its members, usually for housing purposes.  Much can be said about the detrimental effects that breaking up Indian reservations and allotting the land to individuals had on tribes and tribal governments, but the focus of this blog is on how current-day allottees can use their land.

There are over 400 allotments on non-reservation lands in California (called “public domain allotments”).  Allotments can be found on reservations as well.  The probate rules for allotments upon the death of the original allottee provided that the land could be divided between the allottee’s spouse, children, grandchildren, and others.  Over time, these probate rules resulted in allotments having multiple if not hundreds of co-owners, each jointly owning a small fractional interest in the land.  The result of joint ownership is that each person has an “undivided interest” in the land, with no one person owning any specific piece of the land, but everybody owning the land together.  In other words, a co-owner who owns a 5% interest cannot just build a fence around 5% of the allotment, claim it for their own, and exclude other co-owners from that area.  Instead, that person owns 5% of every square foot of the land and shares every square foot with the other co-owners in proportion to whatever percentage they own.

Joint ownership leaves many allotment interest holders asking, “Am I allowed to live on my allotment?”  The answer is a qualified “yes,” but there are important details that need to be understood before moving on to the allotment.  Because a co-owner has an undivided interest, they could choose to build a house on the allotment, but they would not have the legal right to exclude any other co-owners from the house or the land it sits on.  This could make for a lot of potential roommates.

Many co-owners still choose to live on their allotment, often with an informal understanding with the other co-owners that they will not interfere with that person’s occupancy – perhaps in exchange for the other co-owners living on the allotment with the same understanding.  Such an arrangement could lead to  future problems as the land is passed down to new heirs, and who may not be willing to agree to the same understanding as their predecessors.  Unfortunately, an informal agreement may be the only practical way for people to make use of the land, as the formal means for obtaining the exclusive right to live on a portion of the land – a residential lease – can sometimes be difficult to obtain.

Residential leases are governed by federal regulations and are issued by the Bureau of Indian Affairs (BIA).  The difficulty in obtaining a lease is meeting the consent requirement; namely, getting enough co-owners who own enough of a percentage in the land to agree to the lease.  For allotments with 1-5 co-owners, the percentage needed is 90%; with 6-10 co-owners, 80%; with 11-19, 60%; and with 20 or more, anything over 50%.  One can imagine difficulties with all of those thresholds.  For example, imagine an allotment with 50 co-owners, each holding a 2% interest.  A co-owner with their own 2% interest would still need the consent of 25 other people to cross the applicable 50% threshold.  This example of an even division of interests is for illustrative purposes only, since in reality there will be different co-owners with different percentages of ownership, some higher and some lower.  But as you can see, someone who wants a lease in order to build a house on an allotment is likely to need permission from multiple people to do so.

To date, there has been no clear answer on how to solve the problem of using highly fractionated allotments.  However, in recent years, the BIA has used a “Buy-Back” program to target certain reservations with highly fractionated allotments, whereby they purchase small interests from the co-owners and return the consolidated land or portion of land to the tribe.  Also, the federal American Indian Probate Reform Act includes the possibility of co-owners pooling their interests and creating a formal management entity that can operate as a sole decision-making body on behalf of many, streamlining part of the process.  These options certainly have their challenges in terms of funding and proper administration, but at least they represent potential solutions to an issue that has for far too long kept many Indian allotment interest holders from enjoying the benefits of their land.

[1] For convenience’s sake, I will use the term “co-owners” here to refer to individuals holding an interest in an allotment, instead of being cumbersomely accurate with “co-beneficial interest holders.” 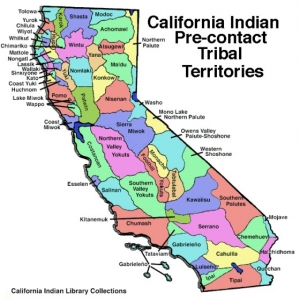 On September 22, 2020, Governor Newsom signed “A Statement of Administration Policy on Native American Ancestral Lands” acknowledging and reiterating that Native Americans occupied California long before statehood and were forced to relinquish their lands and sacred sites,  through violence or other means, to the newcomers descending upon the state. The Policy’s purpose is to “partner with California tribes to facilitate tribal access, use, and co-management of State-owned or controlled natural lands and to work cooperatively with California tribes that are interested in acquiring natural lands in excess of State needs …” This defined purpose is to be accomplished through facilitating Native American access to their sacred and cultural sites located on state lands, improve the ability of California Native Americans to engage in traditional and sustenance gathering, hunting and fishing; manage state lands through co-management agreements that utilize “Traditional Ecological Knowledges” and foster “opportunities for education, community development, economic diversification, and investment in public health, information technology, and infrastructure, renewable energy, water conservation, and cultural preservation or awareness.”

This directive to state agencies means that Native Americans will hopefully no longer be denied access to their sacred and cultural sites on state lands in order to carry out their traditional practices. Native gathering, and substance hunting and fishing will be easier to engage in on state lands. Tribes will be allowed to voice and be involved in applying their traditional knowledge of maintaining natural resources on state lands through co-management agreements with state agencies. Most importantly, tribes may acquire excess state land not needed for a state purpose, meaning areas of cultural importance may be returned to Native American ownership.