CILS has been tracking bills in the California legislature that are relevant to our community. In July 2021, two bills passed that are exciting steps forwards for California tribes:

Now that AB 627 is signed into law, the Judicial Council of California will be creating state court forms that tribal parties can fill out and jointly file to obtain recognition of their Tribal Court family law order by a state court.

Before the passage of AB 1180, any local agency able to acquire and hold land (such as cities, counties, housing authorities, etc.) was able to transfer anything deemed “exempt surplus land” to another local, state, or federal agency. AB 1180 added federally recognized Indian tribes to the definition of agencies who may purchase “exempt surplus land.”

This bill is a major step for federally recognized California tribes, providing a meaningful avenue for acquiring lost ancestral territory. Local agencies must take inventory once a year of any land it holds in surplus. They are encouraged by law to dispose of surplus land by making it available for public entities to purchase through specific procedures outlined in the Surplus Land Act. However, local agencies can also designate land as “Exempt Surplus Land,” which can be bought by a small list of local, state, or federal agencies without going through the purchasing procedures under the Surplus Land Act.

Adding federally recognized tribes to the list of agencies who may purchase “Exempt Surplus Land,” AB 1180 has made it significantly easier for Tribes to buy land from local agencies. Thanks to the efforts of Tule River Tribe, the primary sponsor, and source for AB 1180, the bill was signed into law on July 9, 2021.

Other Bills We Are Watching

The following bills are still in the Legislature, but if passed, will affect California Tribes:

By Nicole Scott, Director of Marketing and Development 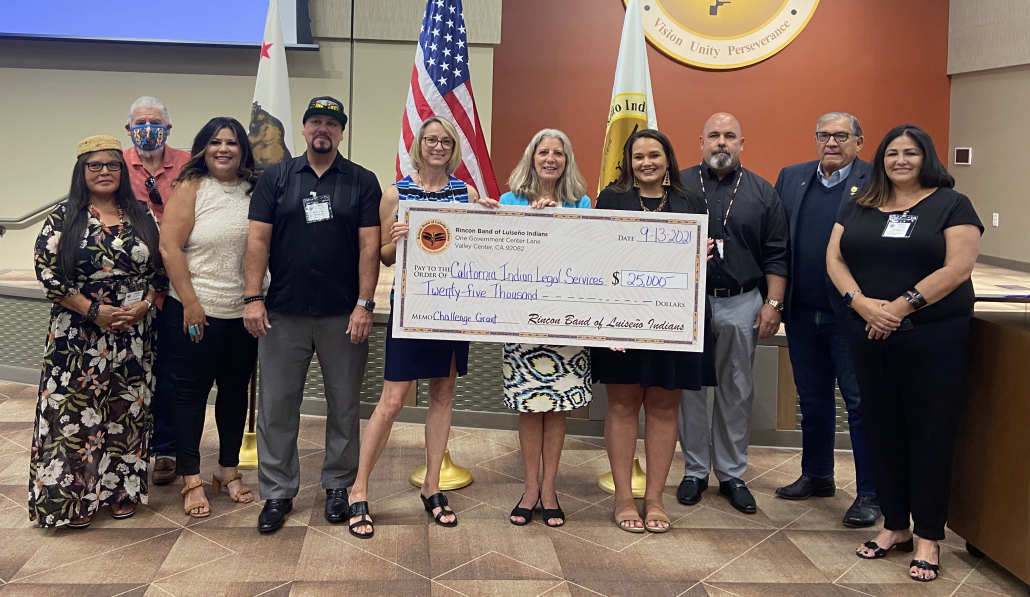 “We are elated to be selected to receive such a generous donation from the Rincon Tribal Leadership and Giving Committee and their meaningful partnership.,” said Heather Hostler, Executive Director. “Because of these funds and other tribal donations, CILS we can focus on the good work that CILS has been doing since 1967 and launch into a new vision to continue to benefit tribal communities. ”

Rincon Chairman Bo Mazzetti stated, “All of our tribes in California have come a long way since the founding of the California Indian Services in 1967. All along the way, we have been met with challenges to our Sovereign rights to control our own destiny! When these challenges faced us over the years, who could and who did we turn to for help? California Indian Legal Services! Let’s not forget what CILS has and is doing for us today. Let’s say thank you and continue to support their important work.”

“CILS appreciates the continual financial support that the Rincon Band of Luiseño Indians provided us and also the acknowledgment by the Tribe of the important past and current legal work CILS has and does do throughout Indian Country,” said Dorothy Alther, Legal Director. “With the Tribe’s funding, we can reach more and provide greater services to low-income Native Americans and CA tribes. Thank you, Rincon Tribe.”

You can help too. Your support makes justice possible. Help our mission to protect and advance Indian rights, foster Indian self-determination, and facilitate tribal nation-building. Click here to donate.

Here are a few examples of the good work from our Eureka office:

CILS gave training “Guardians Ad Litem (GAL) and Court Appointed Special Advocates (CASA) in Tribal Courts” on August 17th, 2021. The training discussed the various ways a Tribal Court may consider setting up a GAL or CASA program and potential resources available. Training topics included: the different types of guardian’s ad litem used in court proceedings; their roles and responsibilities; the benefits of using GALs and CASAs; considerations for establishing a program; incorporating GAL and CASA provisions in a Tribal Ordinance; and resources available to start a GAL or CASA program such as the local University to utilize social worker students, and the National, state, and/or local CASA programs. Tribal Courts throughout California attended, including a few Tribal Courts located outside of California.

CILS is rescheduling its training in conjunction with the Yurok Tribal Court, Hoopa Valley Tribal Court, and the United States District Court for the Northern District of California on “Pro Bono Representation for Domestic Violence Matters in Tribal Courts.” Be on the lookout for a Save The Date Announcement in the next few weeks.

The pandemic has kept CILS on its toes to shift platforms for its “Basic Estate Planning” Clinic scheduled on September 9th, 2021, at the Bear River Band of the Rohnerville Rancheria. To protect our community and elders, we changed the clinic from in-person to one-on-one phone consult appointments. Please contact the Eureka office as soon as possible to schedule a one-on-one phone appointment set for September 9th, 2021. We will address general estate planning issues, durable powers of attorney, advance health care directives, designation of beneficiaries for tribal housing, and the American Indian Probate Reform Act.

Sales tax does not apply when a car dealership transfers ownership of a vehicle to a Native American purchaser in Indian country, provided the Native American lives in Indian country. CILS assisted an individual with explaining to the car salesperson that it was not required for the Native American purchaser to live on the specific reservation where ownership transfers. CILS contacted the dealership and forwarded legal authority confirming the client’s position to the car salesman. The individual is going forward with purchasing the automobile by delivery in Indian Country although she does not live on the reservation where the vehicle will be delivered.

CILS successfully advocated on behalf of a tribal social services department to enforce the Indian Child Welfare Act (ICWA) placement preferences for a California Indian child in an out-of-state dependency court. Upon removal, the state child welfare agency initially placed an Indian child with a foster family that did not comply with ICWA placement preferences. CILS quickly advocated for the child to be moved to a tribal member placement that was the Tribe’s preferred placement. The child will maintain a familial relationship with a half-sibling. In preparation for filing a contested motion for change in placement, CILS advised the Tribe that the preferred placement should establish regular visitation with the child and assist in developing the child’s cultural connections with Tribe. A full evidentiary hearing occurred with the child welfare department, mother, father, and child’s current placement opposing Tribe’s motion to change the placement. Ultimately, CILS was successful, and the court granted the Tribe’s motion for change in placement. The child will now be connected and raised with his extended family, Tribe, and culture.

CILS successfully advocated on behalf of a tribal social services department for the county social services agency to utilize and bear the cost of using a Qualified Expert Witness (QEW) designated by the tribe. The county’s practice utilized one expert witness as the designated QEW on most of its ICWA cases. This county QEW was frequently unfamiliar with the particular tribe involved, the tribe’s position, or the tribe’s preferred and designated QEW. CILS successfully educated the county on QEW qualifications, and the county’s legal responsibility to provide and pay the reasonable costs of an appropriate expert witness. A contested hearing on the issue was avoided. The county contracted and paid for the tribe’s preferred and designated QEW, who was a true expert with firsthand knowledge of the tribe and its child-rearing practices.

The California Community College Chancellor’s Office is reaching out to California’s American Indian Alaska Native (AIAN) community in the hopes of partnering/collaborating on raising the number of AIAN students enrolling and completing their degrees at community colleges across the state.

The Chancellor’s Office will conduct a two-week enrollment marketing and outreach campaign “blitz” beginning Aug. 23, 2021. We’re planning to celebrate the value California Community Colleges bring to each and every student and their communities. The campaign is designed to help collective fall enrollment efforts finish strong and highlight late-start opportunities. As part of this blitz, iHeart Radio is conducting the I CAN Win Cash for College sweepstakes which includes a $5,000 grand prize.

Your assistance is needed to make sure that we reach each and every prospective AIAN student. Whether they are just beginning their higher educational journey, are returning, or are looking to expand their career opportunities, we are here to help them achieve their goal! We will be reaching out throughout this campaign with outreach material both in print and digital and ask that you share the flyer (click button below to download flyer) with your community via in person and on social media. If you have any questions, please contact us at cccadmin@naqcom.com.

The following resources are available for tribal communities impacted by the wildfires.