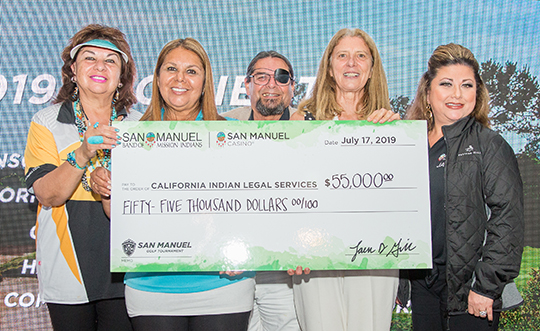 On July 16th and July 17th, over 600 golfers teed off at the Pelican Hill Resort Club in Newport Beach for the San Manuel Band of Mission Indians’ 21st Annual Golf Tournament. Each year the San Manuel Tribe sponsors the golf tournament to raise money for charitable organizations. This year the tournament raised over $275,000.00 and was distributed to five nonprofits serving and advancing Native American causes. California Indian Legal Services was selected for a charitable award, along with the: Chief Seattle Club from Washington, Haskell Foundation from Kansas, California Consortium for Urban Indian Health, and Thunder Valley Community Development Corporation on the Pine Ridge Indian Reservation in South Dakota. Each nonprofit received $55,000.

San Manuel Chairwoman Lynn Valbuena said: “These five organizations are dedicated to improving the lives of so many Native American communities across the nation, and we are so proud to be in a position where we can help. The tournament is just one of the many ways San Manuel embodies a culture of giving back.”

CILS’ Executive Director Dorothy Alther, Chairman of the Board Mark Romero, and Director of Marketing and Development Nicole Scott, attended the tournament, reception, and awards ceremony.

“CILS is extremely grateful and appreciative to have been selected as one of the nonprofits to receive a generous contribution from the San Manuel Band of Mission Indians at their 2019 Charity Golf Tournament,” said Dorothy Alther, Executive Director of CILS. “The donated funds will be used to provide direct legal services to low-income Native Americans and tribes. Our services cover a broad range of Indian law issues. CILS will focus the funds on expungement of criminal records enabling clients to access the job market or find housing, protecting tribal families and tribal member children under the ICWA, and assisting tribes with building the infrastructure needed to meet their members’ needs.” 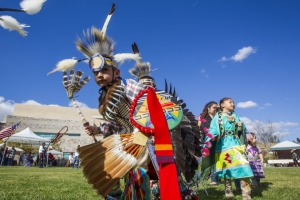