San Francisco, CA – May 17, 2018: Executive Director, Dorothy Alther and Legal Fellow, Anna Hohag, attended the annual California Bar Foundation (CBF) Board meeting where they were invited to speak and present to the Board of Directors in San Francisco. At the meeting, it was announced that CBF would be changing their Foundation’s name to “California ChangeLawyers,” to better demonstrate the organization’s commitment to empowering the next generation of lawyers, judges, and activists to create a more diverse legal profession, a fair justice system, and a better California. As California ChangeLawyers provides funding for Anna’s Fellowship at CILS, Dorothy and Anna presented to the Board the work that CILS does throughout California to represent Native Americans, low-income individuals, and people in rural areas of the state. The Board was ecstatic to hear that CILS through the Bishop office is making real change for clients in rural communities who would ordinarily have trouble obtaining legal assistance. Their issues range from improper tax, tribal court development, and Indian wills to special education services and community education. It was clear that CILS, as one of the premier training grounds for attorneys advocating for tribes in California and nationwide, fit perfectly into the vision of California ChangeLawyers, who were happy to see their Fellowship grants used to further their mission.

California ChangeLawyers awards grants to legal aid agencies to cover the cost of hiring diverse law students or recent grads, and this past year Anna Hohag was CILS’ recent grad. “As a young attorney from a rural tribal community, it was truly inspiring seeing the work and vision of California ChangeLawyers. I feel incredibly honored to be considered a #ChangeLawyer and to be working alongside CILS in furthering their mission to advocate for tribes and tribal rights. Initially, I was shocked to see such diversity sitting around the California ChangeLawyers boardroom table. When you make it to the top of a high rise building in downtown San Francisco and find your way into a fancy law firm, you don’t expect to see faces that look like yours. However, when we walked into the boardroom, we were pleasantly surprised to find such a diverse and motivated group of individuals from all backgrounds. After we finished our presentation, they seemed to be equally inspired by the work that we do here at CILS. The entire experience was rewarding, and to me, every opportunity to build important relationships with other movers and shakers gives me that motivation to continue the work I strive to do.” 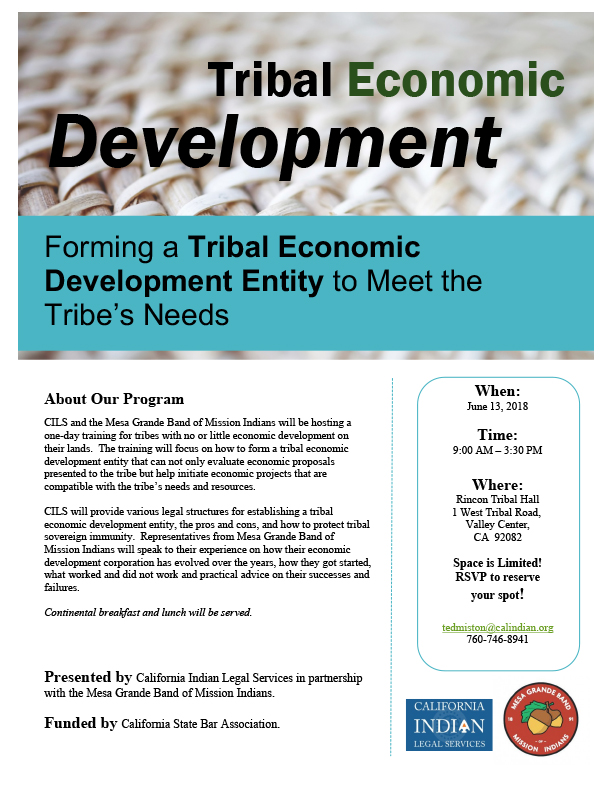 Space is Limited! RSVP to reserve your spot!

On January 31, 2018, the Second District Court of Appeal issued a ruling which could have had a detrimental state-wide impact on the likelihood of Indian children involved in dependency cases being placed into Indian homes. (In re R.H. (2018) 2018 WL 636192.) CILS, in partnership with the California Tribal Families Coalition, recently succeeded in petitioning the California Supreme Court for depublication of the case, so that it cannot be used as precedent in future cases.

If an Indian child is removed from parental custody by a county social services agency, the federal Indian Child Welfare Act, accompanying federal regulations, and California law all require that the county make a “diligent search” for another home which meets the ICWA’s placement preferences. For adoptive placements, if an extended family member is not available, other members of the child’s tribe and other Indian homes are preferred. Such homes provide the child with the best opportunity for a connection to his or her tribal community and a strong cultural identity.

The Second District’s decision could have been interpreted to absolve a county from searching for an Indian home if the child’s tribe said that it would search within the tribe. CILS and CTFC contended that, in addition to conflicting with existing law, such a position would be harmful to Indian children whom the ICWA was designed to protect, in that it would almost certainly result in fewer Indian homes outside of a child’s tribe being identified in the future.

“We’re grateful the California Supreme Court saw fit to grant our request, and we thank the Round Valley Indian Tribes for submitting their own letter in support,” said Jedd Parr, Directing Attorney in CILS’s Sacramento office, who co-authored the request. “It’s already difficult in some counties to be confident that a serious attempt at finding an Indian home has been made. Often the child’s tribe does much of the leg work on their own. Allowing R.H. to stand as precedent could have shifted that burden further.”

“The ICWA’s policy of placing Indian children in Indian homes whenever possible is clear,” said Delia Sharpe, Executive Director of CTFC and the request’s other co-author. “The law says the child’s best interests are protected by doing so, and the child’s best interests are what courts and counties are supposed to be looking out for in these cases. The fact that a child’s tribe searches for a placement within the tribe does not remove a county’s own duty to try to meet that objective.”

Fundraising is always a challenge for nonprofit law organizations. That’s why it helps significantly when other legal services organizations share their successful fundraising strategies and help troubleshoot problems. In May, Mark Romero, Chairman of the CILS Board of Trustees and Nicole Scott, CILS Director of Marketing and Development attended training hosted by the American Bar Association Section of Litigation Committee. Taught by two veteran fundraisers, Jack Ward (retired from the Greater Boston Legal Services] and Lisa Verges (Community Legal Services, Inc. in Philadelphia], Mark and Nicole learned many new fundraising ideas specific to legal aid. The training, held at the posh DLA Piper offices in downtown San Diego, also gave CILS the opportunity to mingle with staff and board from a dozen other legal aid organizations from across the country.

“We thank the American Bar Association Section of Litigation Committee for providing excellent training on legal aid fundraising,” said Nicole Scott, Director of Marketing and Development. “We are implementing what we’ve learned from Jack and Lisa to ensure we have the funds needed for our clients to have access to justice for decades to come.”