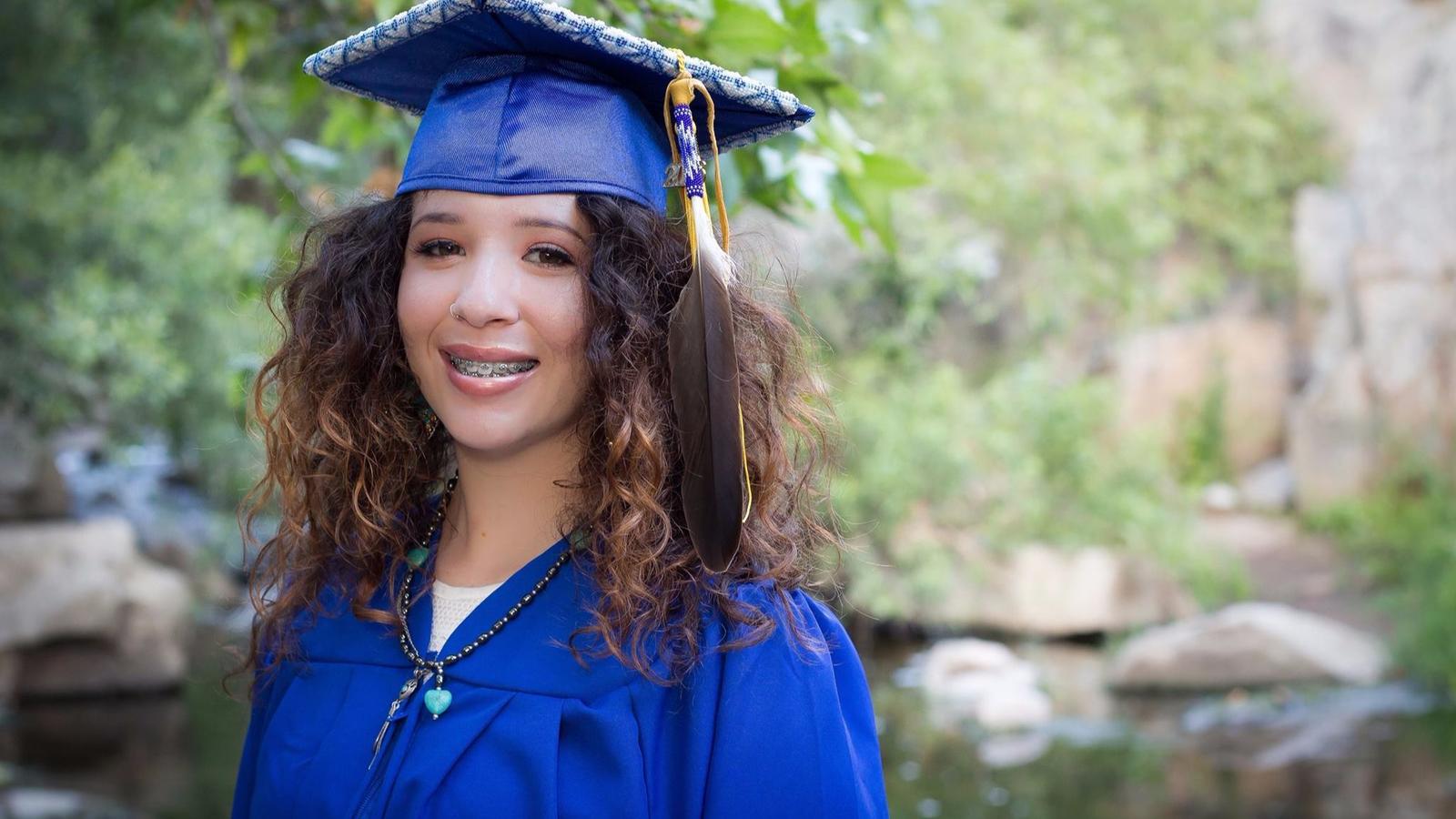 Rebekah Israel, a member of the Lone Pine Paiute-Shoshone tribe, was not allowed to wear a ceremonial eagle feather on her mortarboard when she graduated from the Charter School of San Diego. A new State Assembly bill would change that. (Megan Doughty)

Rebekah Israel said she had waited years for the moment when she would receive her high school diploma while wearing an eagle feather, a power symbol that represents a rite of passage for her and other Native Americans.

But then the moment was stolen from her, she said, as a woman from her school tried to snatch the feather from her mortarboard and scolded her for wearing it.

“I felt really embarrassed, so I just cried right away,” she said about her graduation ceremony in June 2016. “I just grabbed the diploma really fast and rushed off the stage.”

It’s still difficult for the 19-year-old Santee resident to talk about the incident that happened a year ago at the Organ Pavilion in Balboa Park, where she was graduating with other students from the Charter School of San Diego.

“We went over there, and Rebekah was just torn apart,” said her mother, Kiana Maillet. “She told me that this woman looked at her feather and said, ‘You’re not allowed to wear that,’ and she reached for it. Nobody’s allowed to touch our feather. We’re supposed to protect them. She just broke down on stage in front of everyone.”

Similar incidents happen to Native Americans each year in California, but a bill with broad support by legislators could change that for the class of 2018. Israel lent her support by speaking about her experience before an Assembly subcommittee earlier this year.

“I told them I don’t want other students to feel upset when they’re walking and wearing their graduation cap,” she said.

Israel was testifying in support of Assembly Bill 233, which already has passed the Assembly and just last week passed the Senate Education Committee. The bill, sponsored by Assemblyman Todd Gloria, D-San Diego, is headed for the Senate Judiciary Committee next.

As Gloria explained, the bill would allow students in California public schools to wear adornments that represent their cultural or religion during graduation ceremonies.

In Israel’s case, the adornment was an eagle feather, a symbol of strength and freedom to Native Americans. If the bill becomes law, all schools would have to allow religious-cultural symbols.

Jackie Robertson, communications specialist for the Charter School of San Diego, said the school does have rules against adornments at graduation, but would support the bill.

“The Charter School of San Diego always wants to be supportive and cooperative, and if AB233 passes, we will support it 100 percent,” she said. “Currently, our policy is to not allow any sort of adornment on graduation attire because every year we have many diverse requests. Some of them are credible and some of them are not so credible. It would be helpful to the students and schools if the bill’s language were specific to help create fair and equitable guidelines.”

Adornments on mortarboards are very common at college and university graduations, but many high schools have strict rules about prohibiting any items that would disrupt the uniform look of rows of graduates in matching caps and gowns.

Every year, those rules clash with the sentiments of Native Americans students like Israel.

“When I was little, I grew up watching all my cousins and family friends get eagle feathers when they graduated from high school,” she said. “So I’d been waiting for it since I was 10 years old.”

“Our position is that by denying a student the right to wear an eagle feather or another culturally significant item, they are being denied essentially their freedom of speech or freedom of expression,” Vezzola said.

“Those are powerful symbols in the Native American community, and I just don’t think people understand that,” he added. “They’re more than decorations.”

Sometimes the issues are resolved with discussions, and sometimes there has been legal action by the Native Americans Rights Fund in Boulder, Colo., he said.

“Finally, we thought, ‘Why not take a different approach?’” Vezzola said. “Maybe there’s a way to protect these rights through California law.”

Gloria said he was contacted by California Indian Legal Services to work on a bill, and he suspects he may have been asked because he is the only state legislator who also is a voting member of a tribe.

Although he describes himself as “a mutt,” Gloria also is a member of the Tlingit Haida Indian Tribes of Alaska.

“There’s a level of common sense involved here,” Gloria said about allowing students to wear feathers, beads or other items on their caps at graduation. “Why is that disruptive, and who would have an issue with it?”

Gloria said the bill still would allow schools to have a say in what students wear during their ceremonies, but there would be exceptions for cultural and religious items.

“These students are not asking for political statements or other sorts of things, but to just show pride in their culture,” he said. “In a lot of ways, this is speech guaranteed under the Constitution. The bill is meant to get away from this madness.”